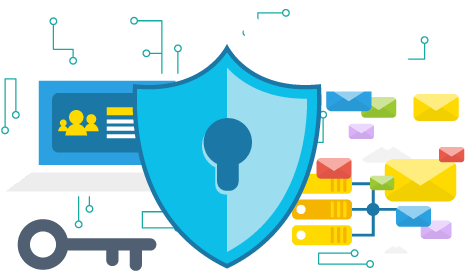 It’s been more than a year since I have written any new post, and I do have really good excuses, if I may say, to corroborate my claim, but that’s for another post! In this post, we will get a bit nerdy and revise some of the basics of security. You may use this as a quick guide or a crash course to recall these topics.

When exchanging data over the web, the data passes through a number of networks and devices. Some of these channels might not be safe and might have malicious entities, hence security technology are essential for the safety of their users. Let’s look at the 4 prominent problems that can occur when data is transferred across the internet.

1) When Alice sends a message to Bob it can be intercepted by Eve during the transmission. This is called interception.

2) Even though Alice meant for the message to be sent to Bob, there is a chance that Eve was posing as Bob. Conversely, although Bob believes he received a message from Alice there’s a chance it was Eve posing as Alice. This is called spoofing.

3) Even if the message was transmitted by Alice to Bob, Eve could have overwritten the message during transmission. This is called falsification. In addition to intentional falsification by third parties, there’s also the chance the delivered message was corrupted by malfunctioning devices or channels.

sequenceDiagram participant Alice participant Eve participant Bob Alice->>Eve: I love you <3 Note over Eve: Message modified by
malicious entity Eve->>Bob: I hate you ! Bob->>Alice: I am breaking up with you !!

4) While Bob believes he received a message from Alice if the sender of the message Alice had some malicious intent there is a chance she might insist later that she did not send that message ! This problem is called repudiation.

sequenceDiagram participant Alice participant Bob Alice->>Bob: I would like to order it... Note over Bob, Alice: Bob ships the items Bob->>Alice: Thanks. That will be $500 Alice->>Bob: Sorry. I had not ordered anything

These four problems are not limited to exchanges between people, but can also occur while browsing a website.

Here are the ways in which we can address the above mentioned problems.

Furthermore, digital certificate also helps to solve the inherent problem of not being able to verify the public key’s owner in digital signatures.

Encryption is the process of encoding a message or information in such a way that only authorized parties can access it and those who are not authorized cannot. In an encryption scheme, the intended information or message, referred to as plaintext, is encrypted using an encryption algorithm – a cipher – generating ciphertext that can be read only if decrypted.

These are the types of encryption systems.

You can read the application of the above cryptography systems in my articles on Blockchain.

Message Authentication Codes (MAC) are used to verify that the message received from the sender is not modified and is in-fact the original intended message.

In this mechanism both the sender and the receiver, use a shared secret key. This key is not known to anyone else [Similar to Shared-Key Cryptosystem]. While sending the message the sender calculates the hash of the message using the secret key, this generated code or checksum value is called MAC. The sender sends this MAC along with the original message. The receiver on receiving the message calculates the MAC again from the message and compares it with the MAC sent by the sender. If the MACs are different than the message is discarded and not trusted. Since the key is secret, the interceptor can not modify and correctly generate the MAC.

A digital signature system guarantees non-repudiation in addition to authentication and falsification detection, the two functions implemented by message authentication codes. It uses public key cryptography to generate a signature. The process is quite similar to HMAC as described above. The MAC generated is encrypted by the private key of the sender. The receiver will calculate the MAC from the received message and compare it by decrypting the MAC. The decryption is done using the sender’s public key. The encrypted MAC can be used as a Digital Signature of the sender. However, there is one problem with this. How do we ensure that the public key of the sender is indeed the one claimed by the sender ? This is solved by Digital Certificate. 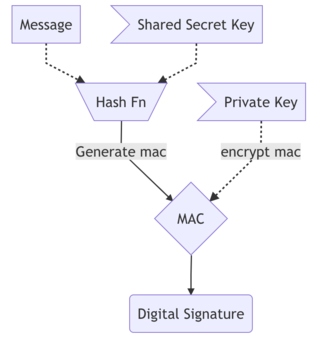 Using a Digital Certificate we can guarantee who the creator of the public key is.

The certificate authority has their own public keys and secret keys that they generate themselves. If Alice wants her digital certificate, she prepares her personal information including her public key and sends it to a CA. The CA after confirmation of the details use their secret key to sign or create a digital signature from Alice’s data. The digital signature and the user data is combined into a file and sent to Alice. This becomes Alice’s digital certificate.

Now if anyone wants to interact with Alice they would first request her Digital Certificate. Then they would acquire CA’s public key to verify the signature. This way we can be sure about the identity of Alice. Once the identity is confirmed the user can use Alice’s public key to securely communicate with Alice using Hybrid Cryptosystem as described earlier. This is how the SSL certificates work. Instead of a person Alice, it is the website and your browser does the work of verifying the certificate with CAs.

Hope this gives you some more idea about how cryptography is used for web security. Let me know your thoughts and suggestions in the comment section below.